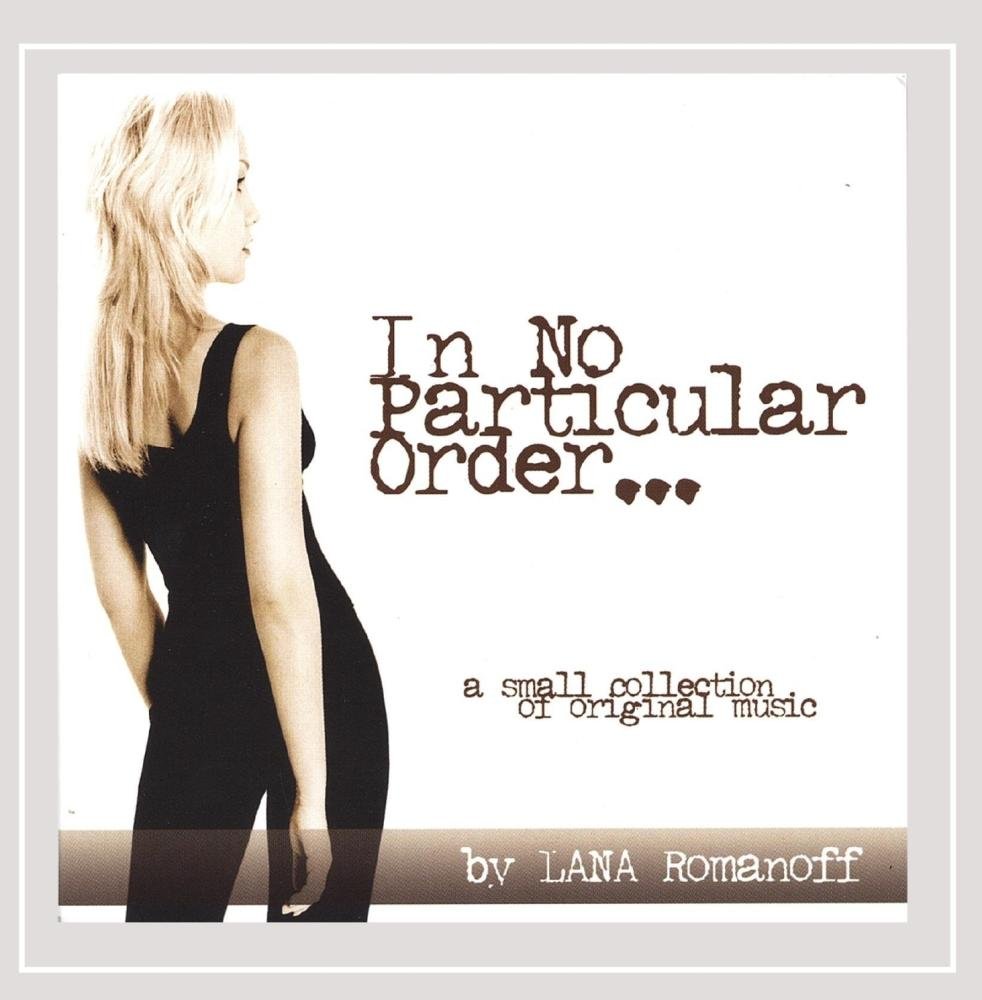 In No Particular Order by Lana Romanoff

Lana Romanoff, a young singer, poet and composer, has come to the United States to find her destiny. Since early childhood Lana was drawn to music, singing in a choir, playing piano and dancing in an ensemble. Russia, the cradle of some of the greatest music in the world - be it Rachmaninov's broad sweeps of melancholy and nostalgia, or daring, strong and captivatingly joyful art of Prokofyev, or the deep warmth of folk music - profoundly influenced and defined Lana's soul yearnings. Growing up during tumultuous times of perestroika, Romanoff observed popular sentiment in public and private lives, expressing her own through personal stories of joy of the new beginnings and the grief of losses. Still searching for answers, at the age of 16 she moved to the US. It was here that she felt she could pursue her dreams.

Back home she had everything; she was singing in a teenage pop group, which once took second place in an all Russian contest. She hosted a popular Russian teenage TV show "TriA" for several years. She attended a specialized English language school considered one of the best in her republic. However, something was missing in her life and Lana was determined to find it, no matter how far she would have to go. And that's exactly what she did. She traveled half the world to find herself in Miami where she continued to study music majoring in music composition and music business at MDCC. In a little while she started performing and recording with "the New Company B" group, which allowed her to feel the stage again and reconnect with her audience. A great experience, it left Lana wishing for more.

Publishing some of her poems in several editions of Poetry Collections in New York, and continuing to write her own songs (she has a nice portfolio of over 200 songs, in both Russian and English languages, ready to be recorded professionally), Lana started to find that something she was looking for. Charismatic female vocals, innovative hip-hop beats, melodious European electronica merged into an ambience abundant with promise. Free from obligations to the band that fell apart, and surrounded by talented people and new sounds, she began developing her own ideas and testing them out with top-notch producers. Soon enough, their passionate efforts bore the much expected fruit. Recording in Miami and New York, as well as working with a producer in Stockholm, she put together a debut album titled "In no particular order," which was released on November 19, 2004.

"People who don't dream, don't have much," said her dad once, and she remembered it. A dream is what you call her music - a catchy tune and a beat that turn into a wall of sound that overwhelms you and sends chills through your body once it reaches the hook. A dream is what you call her poetry - a frank magic that ponders life's quintessential relationship, the one between a man and a woman. Uncovering a well of feminine emotion, its mystique and sensuality, its straightforwardness, its relentless logic of feeling and the desire to love and be loved, her verse shines a revealing light on the infinite possibilities of the human heart. The strange mystery of Bjork, the indulgent sensuality of Fiona Apple and Madonna's powerful abandon - all is present in Lana's music. But most impressive is Lana's own gorgeous lucidity, Russian tempered, with love, in her innocently sexy, and soulful, strong voice of a young girl.

Even One Vaccinated Member Can Cut Family’s COVID RISK

The chances are reduced even further with each additional vaccinated or otherwise immune family member, according to new data.

Why Do We Celebrate Death Holidays?

activity in your area

#160;
When Food Tastes Like Dirt: My Diet During and After Chemo
“As my tastebuds returned, the yuck feeling went away.”
Read Full Post
Heather McCollum | Ovarian Cancer

How Breast Cancer Changed My Life ... and Me

WebMD’s former senior VP tells her story of triple-negative breast cancer, one of the most aggressive and difficult cancers to treat.

Foods That Help You Focus

Adding these foods and drinks to your diet may improve attention, memory, and brain function.

You have symptoms. We have answers.